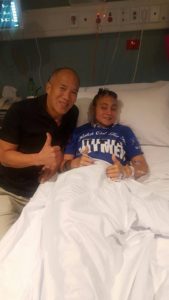 Ziad was diagnosed with an Inoperable slow growing tectal glioma in July 2016. After Emergency Surgery at a Sydney Childrens Hospital to address significant secondary Hydrocephalus & a biopsy, Ziad began to experience double vision and facial weakness on the left side.

8 weeks later Ziad again underwent surgery to address the Hydrocephalus and another biopsy as the tumors rapid progression, which saw it double in size and fill with Cysts, was uncharacteristic of a slow growing Tectal Glioma. Ziad was rediagnosed with an Inoperable Thalamic Pilocytic Astrocytoma. He also awoke with A complete loss of sensation down the entire right side of his body, his double vision worse, and sadly he suffered emotional & sensory disconnections which saw him experience extreme Highs and Unbelievably Sad Lows. None of these issues were explained & no help offered to try recover these losses. We learnt Inoperable is their way of saying your child will die- the lack of rehabilitation is obviously because they don’t want to waste resources on a kid they arent going to save…. The Tumors are growing rapidly and without removal Ziad will be Paralised within 12 months and Dead within 5 years. After seeing the MRI last week compared to 4 weeks ago, and watching Ziads daily struggles, that was definitely a generous estimation of life expectancy.

Ziad knows better than anyone what each Hospital surgery is doing to him, he completely refused to have any further operations by any hospital surgeon.

Learning about Dr Charlie Teo and meeting one of his former patients, Ziad said Dr Teo is his only hope. If he cant do it, he would rather die than let them touch him again because he feared his next side effect and the fact each surgery was costing him a piece of himself, but he would never be saved by them.

Dr Teo reviewed the scans and confirmed what we had argued with Hospital Surgeons about, among other issues, there is in fact 2 Tumors…. however he says they are not Inoperable.

Yesterday Ziad put his life in Dr Charlie Teos hands. ZIADS INOPERABLE TUMOR WAS COMPLETELY REMOVED! He has another that is not causing him health issues and was not accessible during yesterdays surgery, but it is definitely operable if required in the future…

Ziad is recovering so well, his personality is shining through, his ego is strong, his attitude stronger, and in true ‘BigZee’ style he is pushing the boundaries and reaching goals well ahead of expectation.

THIS IS NOT OK! If we weren’t able to raise the $100K for this surgery Ziad would have died. Not Could- WOULD! How can that be fair?? Money should not decide who does or does not survive In Australia.

Dr Charlie Teo is a remarkable Human with a talent that exceeds his peers and a passion that exceeds their humanity. For that he is shunned… He should be respected and called upon for these Inoperable cases, instead they decide a child can die because they simply cannot do what he does. But instead they make it as hard as they can for people who are dying to access Dr Teo and have a chance….

We had to pay $40k to the hospital for the theater room hire. We had to pay All private hospital charges because Dr Teo is not permitted to operate in our public system. Accommodation in the private hospital is payable on discharge once full invoice is finalised, including Room & bed charges, Food, medications, physical therapy, Nurse fees and everything else associated with recovery. Accommodation for 18 hrs in the public Children’s hospital ICU with no food was $4500 because Medicare will not cover Dr Teo. Medications plus additional costs will be billed after invoice is prepared. Ziad also needed a full time nurse to care for him in the ICU which is payable by us. Dr Teo brings his own specialist theater team, including an anaesthetist. All radiology, pathology etc must be paid for.

Not sure what is left to put in his own pocket but i can imagine its no more than any other neurosurgeon.

PLEASE SHARE…… DR CHARLIE TEO SAVED ZIADS LIFE! IF HOSPITALS WONT REFER PATIENTS TO HIM SHARING COULD HELP SOMEONE GOING THROUGH THE INOPERABLE HOSPITAL SYSTEM SEE THE MIRACLE HE IS AND SAVE THEIR LOVED ONE….

Latest from the blog

We will get it right for you!

Our advisers pride themselves in keeping up to date with the various policies on offer. Much has changed in our industry over recent years and the policies available if set up correctly can... Read More

Don’t pay too much, talk to us first!
CONTACT US